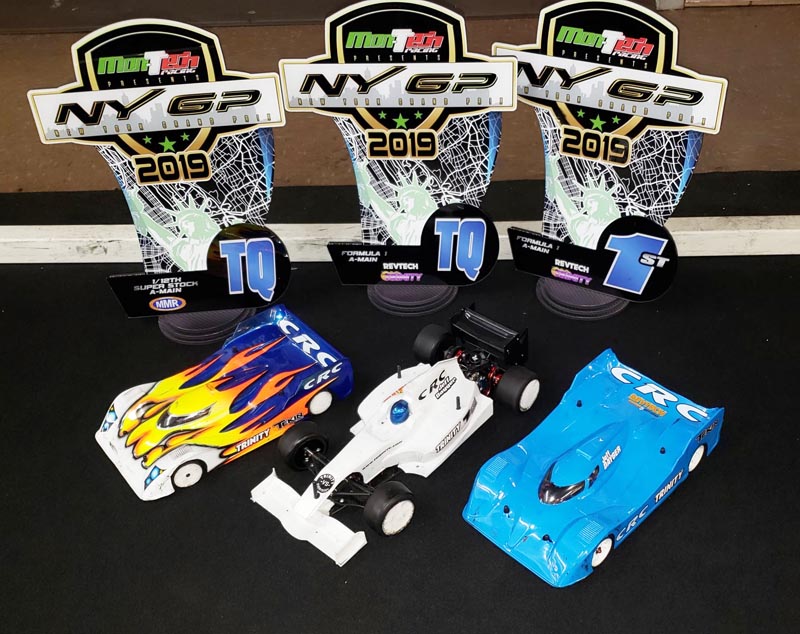 The new 2020 CRC WTF-1 DS wins every round of qualifying and wins the A-main!

Jeff Dayger rolled into 360 Raceway armed with his stable of CRC cars, all 3 weapons ready to do battle. Jeff had his trusty, National and Snowbird winning CRC CK25 for the 1/12th classes. For Formula 1, Jeff was armed with the brand new, unreleased 2020 CRC WTF-1 DS F1 car from CRC.

Arriving early for practice, he looked forward to getting a good setup on the new car. However, the event would prove to be quite a challenge for Jeff and all the competitors as the racers were greeted by a different carpet type compared to most of the races in USA. In the end, the surface would prove to be quite a challenge with changing, inconsistent grip levels that kept all the racers working hard. Early in practice, racers struggled with heavy fuzzing from the grey carpet. Despite the short 3 minute practice runs, many drivers were unable to finish the short session without their race cars spinning out and/or getting loose and hard to drive. It seemed that tires were picking up the loose fuzz causing a loss of grip. This condition was made even worse if the driver went off-line at all.

The rear wheel drive pan cars suffered the most, fighting for traction on loose conditions without the assistance of 4wd like the touring cars. However, the class that suffered the most was Formula 1. The rubber-tired, rear wheel drive F1 cars quickly picked up the loose fuzz on the sticky rubber rear tires, causing a major loss of grip. This was quite evident as early in practice, many F1 drivers struggled to complete only 3 or 4 laps without losing all rear grip and calling it quits for that practice session.

The organizers did all they could and worked very hard to mitigate the fuzzing track and changing conditions; the track was left open for extra hours of practice, different additives and mixtures were tried. As qualifying approached, to address the variable conditions, the event was changed to “Qual Point” qualifying where every round of qualifying is a race among itself. This method takes into account round-to-round changes in the surface and grip levels.

While Jeff went to the event early on Tuesday and was eager to test and work with the new ride from CRC, he would need to wait until later in the weekend in hopes that most of the loose fuzz would blow off the race line and good grip would ensue. With hard work and extra patience of all involved, the track built a decent level of grip on the race line and the event went on.

In 1/12th scale, Jeff had one car ready for CanAm handout motor racing and the other powered by his Trinity 13.5 X-Factor for the Super Stock class.

In the CanAm class, race management gives you a handout motor, they give you handout tires and they tell you what gear to run. What is left? Well, one thing is the car. With the excellent corner speed and handling of his CRC CK25, Jeff would wheel his machine to win all 4 rounds of qualifying! No aluminum chassis, no fancy un-obtainable parts, just one option part, a front center brace.

Look at the qualifying domination in the illustration below. This kind of dominance with equal tires, motors and gearing. Chassis corner speed wins this very “spec” race! CRC CK25 way out front, faster on the track and STILL almost $100 cheaper than the rest! Joining Jeff in the A-main was CRC driver Joe Wright. Joe has been really flying down in NY and getting better every race.

During the weekend, Jeff set fastest laps in the class, with his qualifying laps faster than any lap all weekend. Unfortunately in the single A-main, a small issue took the fastest car of the weekend to the back of the field just a few laps into the race. Looking back at the event, Dayger wished he added front tire sidewall glue to his car, this would have settled his car perfectly for the main.

In 13.5 1/12th scale, Jeff’s used his CK 25 to take T.Q. in this class as well. Unlike the CanAm and Formula 1 class where he won EVERY round, Jeff had to work for this one a bit as an early round DNF had him digging out of a hole. Jeff’s CK25 again rose to the top, taking victories in Q3 and 4, securing the Top Qualifying spot. Jeff used a Trinity X-Factor motor, CRC Pro Cut tires and a CRC/BlackArt Lola body in his quest to take the top spot.

Again bad luck would strike in the final; with a good sized lead A1, a car would come from another lane to collide with Jeff’s leading ride, a racing accident but disappointing for the man from Central NY. After total dominance, winning 6 of 8 qualifiers in 1/12th scale, Jeff would have write this one off to a bad “main day”.

The F1 class is always a bit interesting and challenging. Open wheel cars, rear-wheel drive with rubber tires, and despite 2 wings, the car have very little downforce holding them to the track. F1 racing is a chassis, setup and driving war.

Dayger rolled into NY with the new WTF-1 DS weapon in his arsenal. CRC has a long heritage in F1, winning the multiple IIC, Snowbird, Cleveland and ROAR National Championships with the WTF-1. Now for 2020, tweaking the original WTF-1, this new car features revised geometry, new front end parts, a cool new battery hatch and the new fixed rear wing mount. Like most of the cars entered in the Formula 1 class, Jeff used CRC’s RT-1 F1 tire combo on his machine.

The result: Dayger simply ran away with the class. Just like the 1/12th classes, Jeff was Top Qualifier by a good margin. And unlike the bad luck Jeff had in the 1/12th mains, Jeff cruised to a win in Formula 1, winning by a full lap. Check out the new features of the new WTF-1 DS from CRC;

The travelling show heads to the Gate in Ohio at the end of the month for the Annual Halloween Classic. With CRC taking a few Championships and 6 T.Q.s already in the 2019/2020 season, the team is hoping for good results to come!