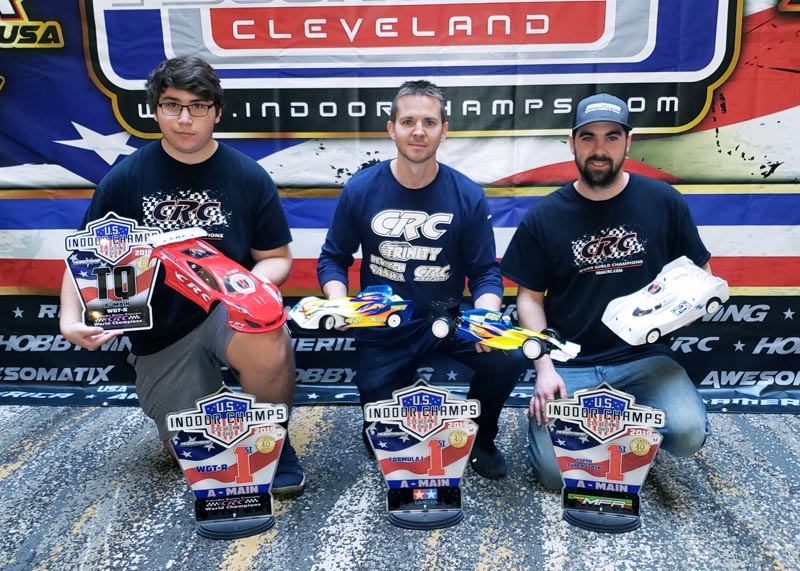 The 40th Annual US Indoor Champs – The Granddaddy of RC races.

Tradition – Stolen from the US Indoor Champs Facebook page;

A tradition is defined as, the transmission of customs or beliefs from generation to generation, or the fact of being passed on in this way. With that said, the US Indoor Champs is a tradition of its own that is 40 years strong running at its one and only home, Cleveland. This institution of a race is the longest running on planet earth with close to half of the racers in attendance not even born during the inception of this glorious race. This year brings many old traditions along with some new changes and an added level of professionalism and promotion.

Something that didn’t change is the desire to have the finest race surface available. And it starts with the sub-floor. Ohio racer Steve Schuttenberg and his crew did an incredible job making the sub-floor pool table smooth. And as usual, CRC Fasttrak II (aka CRC Black) was used for the racing surface. Fasttrak II is made for one reason: racing model cars. It is not exposition floor carpet, not indoor-outdoor carpet, not some marine carpet; Fasttrak II is purposely designed and produced for racing R/C cars. It is an extremely unique product that addresses typical issues in R/C racing; no fuzz or fiber loss, good grip characteristics, flammability issues and resistant to the high G-forces that the cars can generate in a corner. The performance of the carpet surface and the sub-floor was superb.

Paul and Scotty had Michigan racers Walt Henderson and Jody Flipse help with carpet installation and the circuit layout. The 2 did a masterful job using CRC’s Clik Trak Barrier system combined with a mixed of Walt’s hand made curbs to come up with a challenging but car-friendly layout. The CRC Clik Trak makes it super quick and easy to layout a circuit, and the curbing made a safe and gentle system even better. Great job to the track team.

We have been lucky enough to attend the last 33 of these 40 years that make up the Indoor Champs. The Champs represents what the hobby is supposed to entail; fathers, sons, family and friends grouping together, leaving their home club track as a group to attend a major event. With the heart of indoor road racing being in the northern and eastern climates, they leave their club in say, for example, Minnesota, Tennessee, Michigan, Ohio, Virginia, Pennsylvania, New York, Wisconsin or North Dakota and as a group, attend this big event. Cleveland isn’t too far to drive to, so it is a tangible race for many of the midwest, northeast and mid-Atlantic club racers to attend. And, yes, of course, being a prestigious race, there are some big name racers competing in hopes of winning this major championship. However, the focus is not on the hot dog drivers, the emphasis is put on the weekly club racers. That is the magic of the Indoor Champs. This year, the new management team of Paul Lemieux and Scotty Ernst improved the event, further cementing the legacy of the Indoor Champs.

World GT-R is a well attended and competitive class at the US Indoor Champs. It is a mix of new racers with some seasoned veterans as well. The old guard? Drivers like Wayne Gerber, Brian Wynn, Brent Klingforth, Mark Calandra and Steve Boice. Some of the new blood? Drivers like Zach Schuttenberg and Max Buca.

The class features rubber tires that perform and last, season after season, race after race. Add scale bodies with realistic and controllable speeds and the class is a recipe for popularity. Affordable, realistic and driveable.

Max took his CRC Gen-X 10 RT to a dominant Top Qualifying spot. In the A-main, Buca got off to a great start and after a couple “jingles” behind him, Max found himself with a comfortable lead. It was a popular win for the home-town racer and he made it look easy.

Much like other classes during the US Indoor Champs, the A-main was overwhelmingly CRC cars. Joining Max in the A-main were were 6 other CRC World GT-R cars.

With all competitors running the same motor and tires, the 1/12th stock class turns into a chassis, body and battery fight. And after 4 rounds of qualifying, the man on top was CRC front man, Brian Wynn. Brian used the full CRC race package; the CK25 car kit, Rocket Fuel 1s racing pack and the new Black Art B009 body (painted pink of course). Joining Brian in the A-main were a BUNCH of CRC drivers; Jeff Dayger, Jared Bardin, Tom Firsching, Kevin Van Ert and John Wiita. Yes, that is 6 out of 10 with 4 drivers hailing from CRC’s home track in upstate, NY, CRC Raceway.

In the triple A main format, Wynn had a bit of trouble in A1 and let Dayger grab the lead. Dayger held on with Brian battling back for second and Van Ert 3rd. A CRC 1-2-3. In A2, Wynn again got roughed up from behind and lost a lot of time. Dayger again snuck to the front with a hard charging Joe Trandell pushing in second. Wynn motored back and took 2nd at the 3/4 mark. Wynn then reeled in Dayger and the CRC teammate had a tough decision to make; push Dayger and pass for the win in A2 to give him a chance at the title or lay low, play “good sport” and let his teammate wrap up the championship with a win in A1 and A2? Wynn didn’t have long to decide as a small tangle again sent the T.Q. man rearward and handed the victory to Jeff Dayger with wins in A1 and A2. The win was Jeff’s first 1/12th scale win at Cleveland. Brian ended up 3rd on the podium. 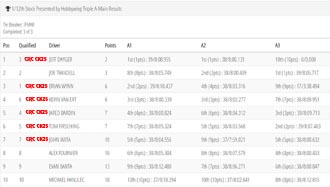 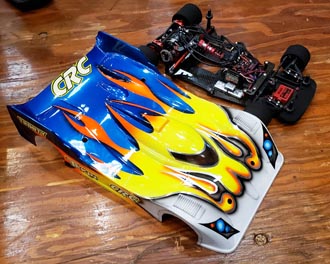 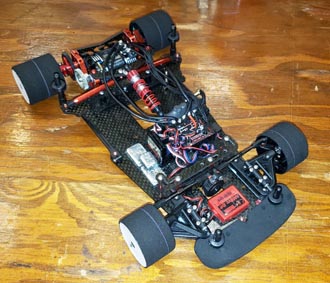 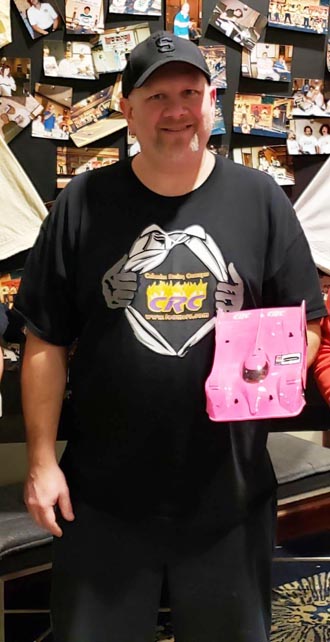 Do not adjust your monitors, yes Brian Wynn did TQ 1/12th stock. Just when you thought he was retired from foam racing, Wynn puts in a clutch run with his CRC powered CK25.

Last year in 2018, Michigan CRC/Trinity driver Andrew Knapp won all 4 qualifiers and led most of the A-main. In an effort to demoralize the competition, Andrew attempted to lap the entire field in the A-main. in hindsight, it was a bad move as he had a tangle with a lapped driver causing causing a failure. This year, Knapp learned from his mistake and completed the sweep without issue. Andrew used his Trinity powered CK25 1/12th scale car to win all four rounds of qualifying again. This time in the triple A-main format, instead of last year’s “kill and destroy” effort, Knapp would set the cruise control on “mild beat down”, steadily driving away from the competition. And while there is always talk of Andrew having a “super” motor, his competitors on the podium were also outfitted with a Team selected Trinity motor. In the end, Andrew drove flawless and his CRC tires, chassis and body allowed him to be quicker.

As usual, the race was held on CRC’s high-bite black carpet with over 400 entries to build traction. Did Andrew need a fancy and expensive aluminum chassis? Maybe a super stiff option carbon fiber chassis? NO! Just a very, very stock, $199 dollar CK25 with standard carbon fiber. No need to drink the aluminum Kool Aid. No need to drain the bank account. Don’t spend more, just win more with CRC. Joining Andrew in the A-main was Jeff Dayger and Kevin Van Ert.

For 2019, CRC had the new, recently released WTF-1 DS car at the event. The car was on a roll winning the 2 major events previous to Cleveland. Jeff Dayger would dominate 3 of the 4 rounds of qualifying only to lose his grip on the TQ spot in round 4. In the A-main, Jeff would wrestle the top spot and cruise on to take the victory. A total of 7 (yes 70%) of the field was the new WTF-1 DC (#1502) from CRC.

The new car features updated front suspension, mild geometry changes and a new rear wing mount. Drivers at the event were simply amazed at how well the new ride got around the track. Rubber tire F1 is a tough game; be aggressive and risk traction rolling or be safe and risk a slow car in the corners pushing and plowing. The new DS car has a greater “sweet spot” and is more forgiving while providing aggressive corner with excellent corner speed. Did we mention its available at $100 less than the competition? Don’t pay more, just win more with CRC.