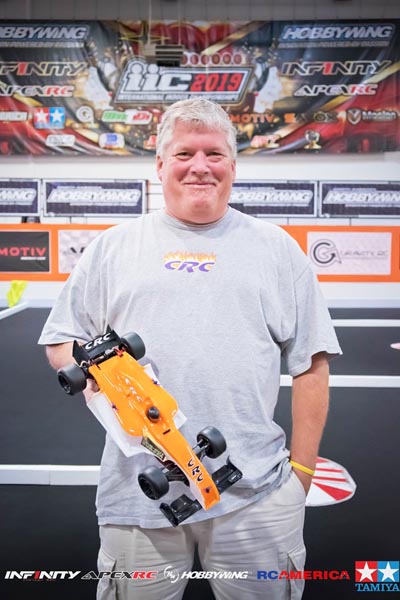 A little twist compared to years past, this year, the IIC would take place at a permanent facility, the beautiful 702 Raceway. What an incredible facility! Scotty Ernst and his hard-working crew did an awesome job as always with the track and the layout. The competition was top notch with top team drivers coming in from all over the globe. And while the venue was new, the racing surface? Tried and true, time tested Fasttrak II, aka CRC Black, only the best. Great grip with a consistent groove.

The 13.5 class is a blend of seasoned 1/12th scale racers mixed in with 17.5 “spec” specialists. The class puts a premium on chassis efficiency and ease of driving, horsepower and driver skill. Team CRC had a strong group of drivers including Brandon Skewes (Genesis Raceway), Jody Flipse (SEP Track crew) and ROAR National Champ John Wiita. After 4 rounds of qualifying, Wiita took his CRC CK25 car with CRC tires to a T.Q. spot. Closely battling for the top spot was Skewes who almost stole pole position in round 4 only to have a small issue send him to 3rd on the grid. Flipse joined his Minnesota teammates in the A-main.

The F1 class at the IIC is always a special event. The first year F1 ran at the IIC, Team CRC took a 1-2 sweep with our original WTF-1. Here we are years later and the CRC F1 chassis is still setting the pace. Despite not having a lot of experience in Formula 1 and with limited wheel time, Michigan CRC pilot Jody Flipse took his WTF-1 FC16 to a Top Qualifying spot. Jody was using CRC’s new #15452 front hinge pin, called the “screw-pin”. This hinge pin uses NO E-clips and allows for quick, easy front end changes and maintenance. Also found on the Flipse machine are the new machined caster shims, #15501. These are 4 precision machined caster shims allowing 4 different caster setting.

The stock 17.5 class really puts a premium on an efficient chassis with killer corner speed. Bring on the CRC CK25 car. Using the deadly quick CK25, the Minnesota boys put their cars on the podium with Wiita take the T.Q. and victory and Genesis Raceway owner, Brandon Skewes taking 3rd. Again, both drivers running the car in nearly stock trim. Congrats!

After the road racing portion concludes, the Vegas crew sets up an offroad track right on top of the circuit that they just spent a week racing on. The CRC Fasttrak II racing carpet has to be the best on both road and offroad. And CRC carpet delivers.

For road racing, CRC Fasttrak II develops a consistent groove that builds to a plateau and then levels out for consistency. CRC Black carpet never has a fuzzing issue and HAS NO “FUZZING PHASE”. There is no dragging through 36 hours of practice waiting and hoping the carpet fuzz will go away. And most importantly for club racers that change track layouts, unlike other carpets that need to go through that dreaded “fuzzing stage” with each and every new layout, CRC Fasttrak II is ready to race, layout after layout, with no “fuzzing”. With CRC Black… the surface provides great grip and develops no stringy fuzz to wrap around the tires and cause a loss of grip,. Right from the start, the traction builds evenly and consistently.

For offroad racing, the mini-spikes used in offroad are very tough on the surface. The carpet needs to be tough to resist the hard, spiked tires used in carpet offroad. Any standard rug will turn into a fuzz ball in short order. However, for road and offroad, Fasttrak II is just the ticket. Fibers stay tightly knit and traction builds to a plateau and then levels out. Great grip, no fuzz, no “fuzzing stage” and tough to withstand the rigors of offroad. Only the best racing surface for the two of the premier events in the country, the IIC and the IOCC in Las Vegas.

Fasttrak II – the only carpet designed strictly and only for racing model cars.

Is CRC Fasttrak II simply a generic product made by a carpet mill then re-labeled for RC Car racing? Absolutely NOT! CRC carpet is designed EXCLUSIVELY for RC car racing by CRC and the textile engineers at the plant. CRC Fasttrak II is only produced for one purpose; racing RC cars. It is not exposition flooring, it is not re-labeled indoor-outdoor carpet, it is engineered and designed by CRC for RC cars. We design it, we make it, we can change it, we control every facet of the material, and we have been involved in carpet production for RC car racing since 1989. Yes, 30 years of experience in model car racing carpet and made right in North America.