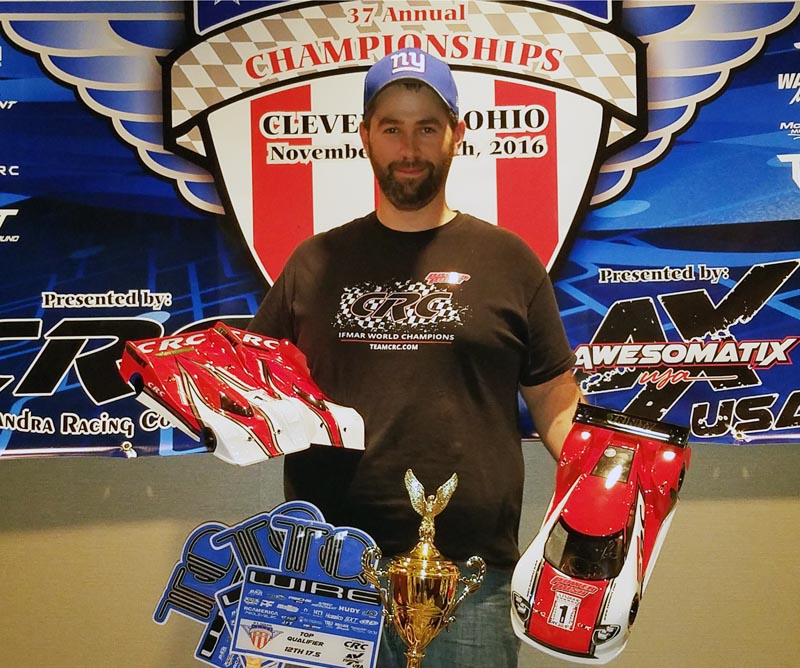 Tom Firsching – The King of Cleveland!

For the first time in U.S. Indoor Champs history, a handout tire rule would be implemented on the field. All competitors received their purple stripe tires at sign up. The World Champion CRC Xti-WC would take the top 3 qualifying positions with NY driver Tom Firsching taking T.Q. with Dana Bailes and John Tortorice starting 2 + 3. With CRC drivers Jeff Dayger and Andrew Knapp making the A-main as well, a full 50% of the field used the CRC Xti-WC car!

In 13.5, a very tough field of competitors chased the A-main win. In the end, T.Q. Tom Firsching would wrestle the top spot in the final round of qualifying. And just like the 17.5 division, CRC cars, tires and bodies would qualify 1-2-3. Andrew Knapp and Dana Bailes would round out the top 3 positions on the starting grid with their CRC Xti-WC cars. In the A-main, a titanic battle between Firsching, Knapp and Josh Cyrul would ensue with all 3 drivers very close at the beginning. Tom opened a little lead while Knapp and Cyrul wrestled for second. In the battle, Knapp would set the fastest single lap with his CRC ride. Tom would stay steady and take the win, sweeping both 1/12th classes he entered.

After its introduction into the racing scene in last fall, World GT-R keeps growing and gaining popularity, both at local tracks and big race events. Why? Rubber tires that last forever, give incredible grip, need no truing and stay fast run after run. Easy to drive 1/10th pan cars with more realistic bodies and scale sized tires that last and perform race after race. It is an easy class to get into and an affordable class to stay into. At the 2016 US Indoor Champs, a good sized field of 40 cars entered.

Illinois CRC driver Jim Piersol and CRC’s own Frank Calandra would battle for the Top Qualifying position inches apart in all 4 rounds of qualifying. With both drivers using the CRC’s WTF1 FC16 chassis, each would lead at different points with Frank edging out Jimmy in each round to secure the T.Q. spot. On his FC-16, Calandra would use CRC pre-mounted F1 wheels + tires, a CRC 2s battery pack and a Hobbywing JustStock ESC.

In the A-main. Piersol came out smoking taking the lead from Frank in the early stages. Jim would make a small mistake letting Frank and Nate Lyday by. Piersol had a rocket on his hands and he would quickly recover, reeling in the CRC WTF1 FC-16 of Nate Lyday and set his sights on leader Calandra. Much like qualifying, the 2 would again battle but a small touch would send both cars flying. Sneaky Nate Lyday would take the lead and drive home for an impressive win for the Illinois driver. Frank would recover for second and Ohio driver Zach Schuttenberg would round out the all CRC podium. Joining the CRC podium bunch in the A-main was 2-time defending champ Brian Wynn, Mark Sweeney and Ron Mick.