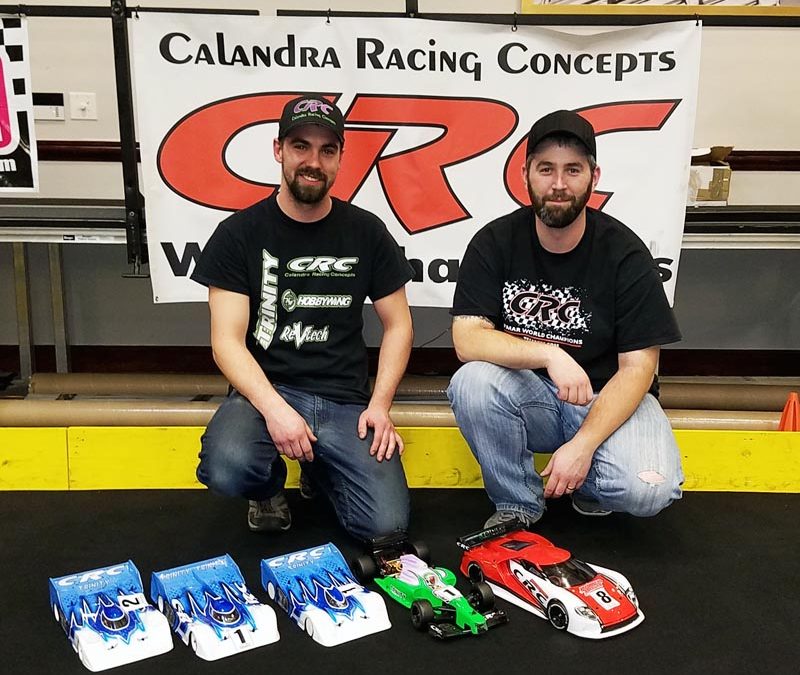 Clean Sweep in Cleveland! CRC T.Q.’s and wins every class at the US Indoor Champ

Wow, what a dream weekend in Cleveland, Ohio for the 37th Annual U.S. Indoor Champs. Almost 500 entries make this event the LARGEST road race in the US. With almost 40 years of racing heritage, the U.S. Indoor Champs attracted all the big names in the US with some of the largest class entry numbers ever. In a simply amazing weekend, CRC T.Q.ed and won every class that we offered cars for. In addition to taking the top spot, the amount of CRC cars and products in attendance was amazing.

The 17.5 class for 1/12th scale was very well attended with 87 total entries, a deep field. Much like the race in Vegas a month ago, Andrew Knapp and his very stock CRC CK25 1/12th car won every round of qualifying and then capped it off with a wire-to-wire win in the A-main. His closest competition was teammate Jeff Dayger in his CK25. Dayger qualified second and stayed close to Knapp in the first half of the race. Andrew somehow found a way to slowly sneak away from Dayger who was driving incredibly tight and clean. Six out of the 10 A-main cars were the new CK25. Joining the top 2 was Tom Firsching, Kevin Van Ert, John Wiita and a rookie to the Cleveland race, Jared Bardin.

A special about Jared Bardin from CRC’s hometown in Rome, NY…. Not only was this Bardin’s first ever U.S. Indoor Champs, but this was his first ever “non-club” road race away from his home track at CRC Raceway in Rome, NY. In his first event ever away from home and on the biggest stage in road racing, the young driver put his STOCK CRC CK25 in the A-main against almost 90 of the best 17.5 racers in the USA. Like most any young racer, Jared is on a strict racing budget, he doesn’t have the extra cash for bling and zing. Jared used his stock CK25 with no Z-flex chassis, no titanium options, no fancy parts. Just good ole affordable CRC quality and performance, a lot of practice and dedication. That’s how you get it done!

2017 marked the first year of the U.S. Indoor Champs without our beloved Ian Ruggles. Earlier this spring, sadly, we lost Ian and the Champs just was not the same without him. Ruggles had a deep passion for 1/12th scale and a long history at the Champs; competiing, managing and announcing the event. We all missed his smooth, booming voice and exciting tone when calling the A-mains. By winning the 17.5 class, Knapp was awarded the Ian Ruggles memorial trophy which was turned over to Ian’s family. Godspeed Ian Ruggles.

World GT-R – The class continues to grow with almost 40 entries for the event! Team CRC rolls in World GT-R

World GT-R cars are just plain fun and easy. A great combination of features makes the class awesome. With CRC rubber tires that last for years, scale “real” car appearance and speeds anyone can handle, World GT-R continues to grow. With the relatively easy “driveability” of the cars, the racing in the World GT-R class is very close as all the drivers squeeze everything they can out of their car to get the best run.

They have been running GT-R in Cleveland since it’s inception in 2015. Each year, the class grows and new faces join the ranks. One thing that doesn’t change is the eventual class champion. Two-time defending champ Tom Firsching took his Gen-X10 RT to yet another World GT-R win to make it 3 in a row. He did not have it easy as 2nd place Brian Wynn pushed Tom from start to finish in the A-main. An interesting note about Brian; in an effort to prove how scale and fun the class can be, Brian used a number of different bodies during the weekend. In round 1, he was T.Q. with 1970 Pontiac Trans-Am, not the most aerodynamic body available, but it proves, you can be VERY competitive with the body of your choice, not necessarily the lowest, meanest, most “racey” looking body available in the class. In the A-main, he chose a very scale looking Mustang body. He pushed Tom for 5 minutes, hounding Tom waiting and looking for small opening. With Brian and Tom living about 1/2 mile away, racing at the same track every week and being on the same team, Brian chose to wait for a mistake from Tom rather than stick his nose in a gap that didn’t exist. Unfortunately for Brian, that mistake never came from Tom.

Rolling around just a short way behind those 2 was eventual 3rd place finisher Mark Calandra. Mark was patiently waiting for a little “paint trading” from the 2 leaders so he could sweep around and take a victory. Unfortunately for Mark, that never happened and he would go on for an uncontested 3rd place finish. The top 5 cars were all CRC.

The 1/12th 13.5 class typically draws some top level modified drivers as well as racers from the 17.5 stock class. The class is deep with talent and this year featured 47 entries. CRC cars, tires and Black Art bodies rose to the top in the hands of Andrew Knapp and Tom Firsching. Joining them in the A-main was Jeff Dayger, John Wiita, Kevin Van Ert and Jari Taskila. Yes again, just like 17.5, that makes 60% of the A-main on CRC cars and tires with many of them using the CRC #3702 6300 battery pack as well. This 6300 pack has been re-released with killer power. Typically testing with the GFX, yield data test numbers of 6300 mah, 3.79 average voltage and 1.2 internal resistance with 4 volt runtime numbers at near 100 seconds. The pack is BAD-FAST.

Formula 1 – Knapp leads every lap, T.Q. all 4 rounds and wins the main wire to wire.

The Formula 1 class continues to grow in North America, especially at large events. With more manufactures jumping into the fight, the class is getting very competitive. At the 2017 U.S. Indoor Champs in Cleveland, 60 competitors entered the F1 class, making this the largest F1 race ever in North America.

Much like last year, the class was dominated by the CRC WTF-1 FC16. Andrew Knapp did it again, leading wire to wire. The CRC WTF-1 accounted for 40% of the A-main field with last year’s T.Q. and runner up, Frank Calandra, taking his newly built CRC WTF-1 car to a top 3 finish. Joining the podium duo was defending champ Nate Lyday and Jim Piersol. Many of the cars in the class used the very popular CRC RT-1 pre-mounted tires for awesome grip and super long life.

Andrew’s F1 was fairly stock, no fancy carbon or aluminum chassis, mostly stock kit parts. The only option parts on the car was a Fenix gear diff and CRC’s soon to be released machined upper A-arms.

Modern 1/12th modified cars are just plain scary to drive. They are little rockets that fly down the straights and barely lose any speed in the corners. At the start of the event on practice day, Andrew had no intention of running 1/12th modified. He was busy with 3 other classes, he didn’t work on his car from Vegas and he was not prepared. With big encouragement from Frank Calandra (well, maybe more than encouragement, a little kick in the ass might be a more accurate term) and some coaxing from his dad, Knapp charged the battery for round #2. With no result going into round 2, he was resorted to dead last in the bottom heat. He poked around the track feeling out the power and handling of 1/12th scale modified gaining him a 3rd qualifying position. Now sorted into the A-heat in third, Andrew pushed a bit harder with more confidence in round #3 gaining him a close second, just missing T.Q.. For round #4, Knapp and motor man Jim Dieter threw it all out there and he ripped the car around for a T.Q. spot. In the A-main, Andrew and his Trinity powered CK25 was simply on a different level. He drove away from the competition at times making it look easy as he bantered jokingly with other drivers on the stand. Obviously an incredibly gifted driver with a very good program behind him.

CRC has been a big part of the U.S. Indoor Championships for years. For the first 15 – 20 years, the NORCAR club in Cleveland put on the event. They did an excellent job in a period of time that was quite different to put on a race. Back then there was no internet, no forums, slow communication, no Facebook, no Pay Pal, etc. They did an incredible job to make the event what it is. However, over time, changes in club personel made it difficult to keep going as a volunteer group. They decided to stop running the race. With the future of the race in jeopardy, we got involved to sponsor the race to keep the race alive and to help the new management that took over the event. Over the past 15 years, we have seen many management teams come and go along the way, all struggling to get the race back to the event it once was.. For many years, past management messed up the race so bad at times it was a bit embarrassing to be a part of the event. We went through a number of years where the event left a lot of racers looking for more. As much as it hurt at times, we stayed involved in the race, hoping for better days.

About 3 years ago, the current race management team of Ken Miller and Sean Bushnell stepped in and took over the race. And like many of the regimes before them, well, let’s just say there were many issues for Ken and Sean. The first 2 years, the race itself was still fun and competitive, but management problems and growing pains hindered the overall experience of the race. Each year, the race got better and better. Last year, a move to a new awesome hotel made a huge difference. For 2017, we are thrilled to report the management team got it right. From the smooth sub-floor and perfect carpet installation, to the improved, more professional flow in tech inspection, to the effective race control, to the excellent hotel with big comfortable rooms and a heart-attack producing free breakfast every morning, the 2017 US Indoor Champs was a huge success. And unlike many years in the past, we are happy to say that we are really proud to be part of the event this year, great job Sean and Ken! If you were not there this year, MAKE PLANS NOW for next year, no worry about which date, it is always on Thanksgiving weekend. Awesome job US Indoor Champs management!