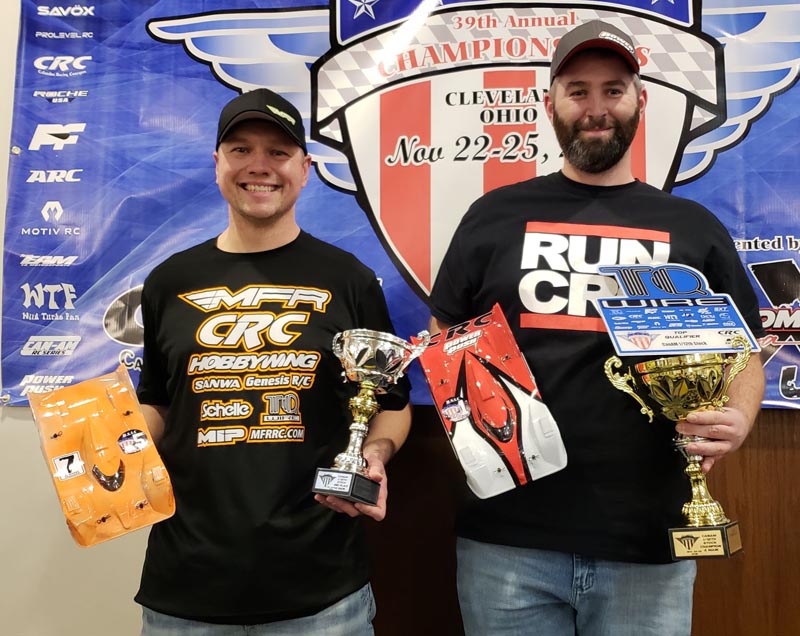 CRC cars – Top Qualifier in 4 classes at the

Andrew Knapp and Tom Firsching T.Q. 4 out of 5 classes!

The 39th running of the famed U.S. Indoor Championships in Cleveland presented some new motor and gearing rules designed to level the playing field. Each competitor received a motor and only one gear selection was allowed. And while the motor, gearing and tires rules were different this year, one thing that remain the same…. the CRC CK25 1/12th scale car remained the car on top.

As usual, CRC drivers dominated the 17.5 class qualifying, with a 1-2-3 sweep. Tom Firsching, Dana Bailes and Mark Calandra grabbed the top 3 positions after 4 rounds of qualifying. Joining them in the A-main were CRC pilots John Wiita (5th), Kevin Van Ert (8th) and Jeff Dayger (10th) A full 60% of the field.

In the A-main, Tom Firsching would be steady and smooth, fending off an early full-fledged assault from CRC teammate Dana Bailes. The top 2 would have a titanic battle with Tom hanging tough and Dana doing an incredible job trying to find his way around Tom without any contact. John Wiita would work his way into 2nd position to make it a CRC 1-2 on the podium.

And much like Andrew Knapp in Las Vegas in early November 2018, Tom used his very stock CRC CK25 car kit. Carbon chassis and bottom plate, no aluminum, no titanium.At just $199 for the CK25, you can spend a lot more for a different brand or save money and win more with CRC.

Trinity powered Andrew Knapp whipped up on the field. He won all four rounds and dominated the A-main, building a 3/4 lap lead, and then… a crash with lapped traffic knocked the fastest car out of the A-main. Tough break for the Michigan driver, sometimes the fastest car just doesn’t win. The A-main – yes again 60% of the field in CRC cars, bodies and tires, many with CRC batteries as well. Joining Andrew in the A-main were CRC pilots; John Wiita, Dana Bailes, Jeff Dayger, Kevin Van Ert and Tom Firsching.

The CRC WTF-1 car has been the Top Qualifier in EVERY Formula 1 race at Cleveland. This year, the WTF-1 won all four rounds with Dayger taking round 1 and Tom Firsching winning rounds 2, 3 and 4.

In the A-main, 2nd qualifying Josh Cyrul, rocketed off the line, grabbing the holeshot from Tom in turn 1. Firsching battled back trying every line, inside and out, but he couldn’t find a clean way around Cyrul. Dayger motored up to the lead battle with his WTF-1 but could not make a move. The WTF-1 cars were solid in the A-final!

The World GT-R class is super easy to race, affordable, fun and close. The tires last “multiple seasons” and the cars have a very scale appearance. With more and more manufacturers producing World GT-R machines, the class will continue to grow!

World GT-R has run at the Champs since its inception in 2015. The class has grown to one of the larger classes for attendance at the US Indoor Champs. And at the Champs in Cleveland, there has been only 1 winner of the class; yes… that Tom Firsching guy again! Tom took his awesome red + white Corvette to another T.Q. and win! Keeping Tom on his toes was second place finisher, Speedmerchant driver, Steve Boice. Rounding out the podium was CRC front man Brian Wynn with his Gen-X10 RT. In addition to a bunch of CRC cars, we had chassis from Destiny, Speedmerchant, XRay and Roche. More and more manufacturers are getting into the world of World GT-R, the class shows a lot of promise in the future.