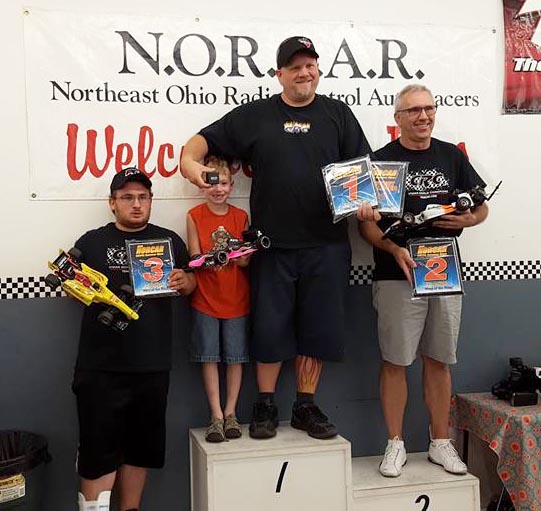 CRC sweeps the podiums at the Summer Slam in Ohio

The CRC WTF1-FC16 sweeps the podium

CRC cars sweep both the Formula 1 and World GT-R podiums!.

New York driver, Brian Wynn, used CRC’s new WTF1 FC-16 Formula 1 car to top qualify and win the 2016 Summer Slam at the NORCAR club venue known as the Gate. In addition the CRC car, Brian used the CRC 2s Shorty pack with a Hobbywing XR-10 controller. While Brian was able to take the T.Q. and win, the fastest driver/car combo was the CRC F1 machine of Wisconsin driver, Mark Sweeney. Mark set fast lap in the main and some of the qualifiers coming up just .3 seconds behind Brian in the A-main. Like Brian, Mark’s CRC ride was powered with CRC batteries and equipped with CRC’s F1 tires.

Speaking of tires, Brian used a very old set of CRC RT-1 rubber tires. These are tires Brian has used at a few races in the past. This goes to show that the CRC RT-1 tire lasts incredibly long with no performance fall off. Race after race, week after week, these tires keep working and keep turning fast laps. With performance and wear like this, tire racing expenses are kept to a minimum.

Joining the 2 old guys on the stand was Ohio young gun Zach Schuttenberg. Zach was a hired gun driving for the world famous team owner and mechanic, Greg Finan. Greg had Zach’s car dialed in and the young man took the CRC WTF1 to a 3rd place finish sweeping the podium with a 1-2-3.

The WTF1 is the most affordable kit on the market and is backed by CRC’s excellent race and parts support.

After its introduction into the racing scene in the fall of 2015, World GT-R keeps growing and gaining popularity, both at local tracks and big race events. Why? Easy to drive 1/10th pan cars with more realistic bodies and scale sized tires that last and perform race after race. It is an easy class to get into and an affordable class to stay into.

Following wins in Snowbirds, MHIC, and now the Summer Slam, the new CRC GenX 10RT (Rubber Tire) is now in production. Brian Wynn and Mark Sweeney again went 1-2 with both drivers using the production GenX 10RT. And again in World GTR, Mark Sweeney had the fastest lap time in the main, a great job from the Wisconsin driver. Of course, all the drivers used the RT-1 rubber tire and GTR rim with consistent, dependable performance. Joining Brian and Mark on the podium was Ohio driver Pat Barber. Pat is one of those crafty racers that enjoys making his own modifications and tweaks to his race cars. Pat used a “Barber-modified” CRC GenX 10 SE.

Another great event hosted by the NORCAR crew at the Gate.