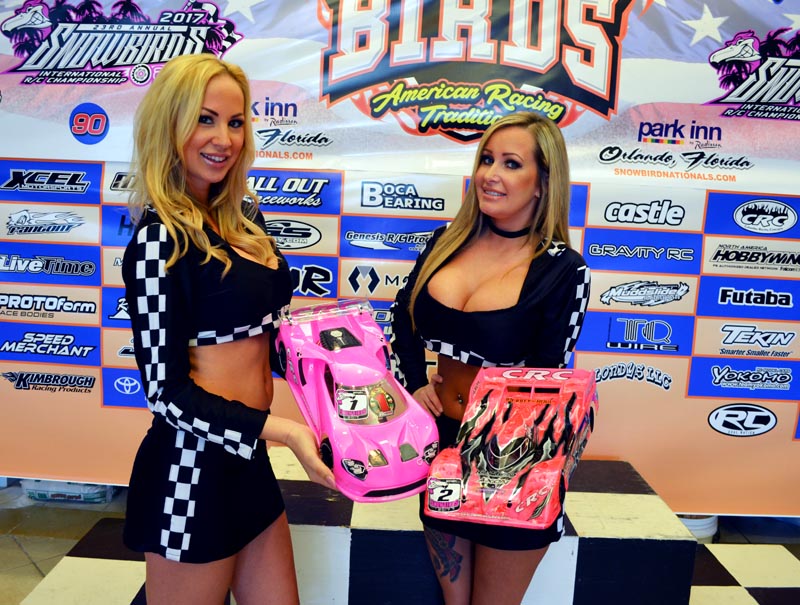 CRC takes 2 at the 2017 Snowbird Nationals

T.Q. and winner of World GT-R

After taking a second in 2016, CRC driver Brian Wynn came out swinging in World GT-R action at the 2017 Snowbird Nationals. He would have his hands full as defending Champ, Team CRC Japan driver Kosuke Suzuki, was in the house ready to hang on to the title. A full 70% of the cars were CRC including guest driver and Snowbirds race announcer, Greg Sharp. Greg used the CRC house car normally driven by Frank Calandra Sr. to make the A-main at the Snowbird Nationals. An interesting note, Brian won the 2016 Las Vegas race with this same physical set of RT-1 tires. He has since raced some club races, the 2016 Halloween Classic (1st) and the U.S. Indoor Champs in Cleveland (3rd). Now at this event, Brian used the same exact set of rubber tires to T.Q. and win the 2017 Snowbird Nationals. Club races and 3 major championships ON 1 SET OF TIRES!!!!! CRC RT-1 tires… consistent performance, race after race for multiple seasons.

Another good turnout of Formula 1 cars at the 2017 Snowbird Nationals. Since 2015 and the release of the first CRC F1 car, our results have been extremely strong. While we have not been able to nail down the championship, CRC F1 cars have finished 2nd + 3rd in 2015, 2016 and 2017. This year, Kosuke Suzuki took 2nd with his Team CRC Japan teammate Kazuki Yamashita rounding out the podium. Suzuki used his CRC WTF-1 FC16 to set the fastest lap time in the A-main. A full 40% of the field chose CRC F1 cars and 100% of the field, including Yokomo pilot Toto Ebukura, used CRC (2320) pre-mount F1 tires.

The old 235 mm wide 1/10th cars are making a minor comeback racing outdoors at many tracks in Europe and Western USA. The 1/10th pan cars benefit from the wide body that generates a lot of downforce. On some of the larger indoor venues, we are seeing some entries for Pro-10, but without question, the width and speeds of these cars make them more suited to outdoor racing.

Our Ohio based team driver, Dana Bailes, had good luck in November with his CRC World GT car converted to the 235 class with CRC 235 expansion kit. With that in mind, we threw a couple 235 cars (well eight to be exact) together for the 2017 Snowbirds. The yet unnamed Pro-10 from CRC ran extremely well. In the A-main, a small issue with the T.Q. machine allowed 2nd qualifier Hayato Ishioka to take the win with teammate Takeshi Shinomiya taking 3rd. CRC drivers Kazuki Yamashita, Brian Wynn and Dana Bailes rounded out the top 6, five of the top 6.

Taking the race winning knowledge gained from years of successful World GT and World GT-R racing, CRC’s new yet to be released Pro-10 car uses many World GT parts and assemblies. Affordable, available and easy to set up. Stay tuned for details!

No timing speed controls with open motors had the competitors in 1/12th modified scrambling to find speed and runtime. Hayato Ishioka used his Xti-WC with CRC tires to take a solid podium finish. Joining Hayato in the A-main were teammates Andrew Knapp, Kosuke Suzuki and young Team CRC Japan driver Kazuki Yamashita. A full 40% of the field using CRC tires and the World Champion CRC Xti-WC!

The winged class featured a fast 2s/13.5 power package. These cars really scooted down the straights. The cars gripped great in the corners. The result: the cars looked and drove like the real thing. Drivers had to do something they have not in years; LIFT for the corners. Yes, would you believe they had to SLOW DOWN in the corners, just like real racing! The tires didn’t change from run to run. No gearing changes, no ride height changes, no hours behind the tire truer.

In addition, the tires and the cars looked true to scale, not the door stop, slammed slot-car looking bodies we see in foam tire racing. The CRC RT-1 tires are very close to a 1/10th scale version of a NASCAR Goodyear racing tire. In fact, most model car racers think the CRC rubber tire is way too big, in fact, the RT-1 is just a touch smaller than a real NASCAR tire in terms of scale.

A big thanks to the Snowbirds race management for another fine event. Brand new CRC Fasttrak II racing carpet (CRC Black carpet) was well received. We heard from nothing but praise from the European drivers, wishing and hoping that they had this kind of grip back home. No fuzz, wicked traction for both rubber and foam, the CRC Fasttrak II Black carpet put smiles on many of the competitors. And new for 2017, rubber tires on the oval! A small taste of the future.

A huge thank you to all the CRC faithful and the entire CRC team at the event! Special thanks to Team CRC Japan under the guidance of Kimihiko Yano for making the long trip to the USA to race with us. See ya in 2018!