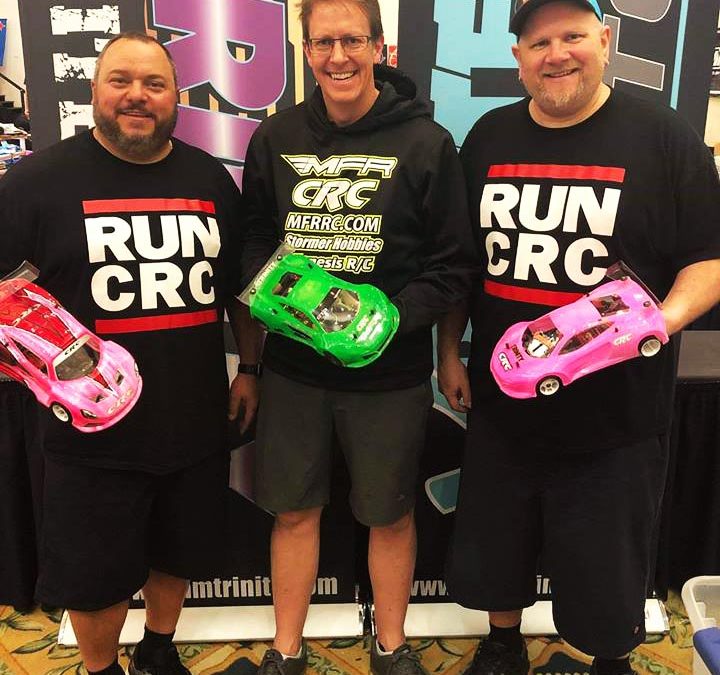 The Silver Anniversary Race – 25 years of the Snowbird Nationals!

A new class for the Snowbird Nationals

GT12- 1/12th scale pan cars with 21.5 motors, spec tires (Purple Stripe), 1s battery packs and GT bodies. With the power limited, a premium is placed on chassis efficiency and performance. And rising to the top, the CK25 car from Calandra Racing Concepts.

In the A main, Charlie Menard, team leader for the Menard Factory Racing (MFR) effort, harassed Wynn, sneaking his CK25 past Brian to take the A-main victory. Charlie was super fast all weekend and despite having to put up with his pit buddies John Wiita and Kevin Van Ert for a full week, he was able to clear his mind and focus, taking the win in GT12. Colorado CRC teammate Mario Ficco mounted a broom to his CK25 making it a CRC sweep of the podium. All three drivers used CRC tires, CRC batteries and of course the CK25 car.

The Stock Can-Am class for 1/12th scale has very few tuning and tweaking options; the tires are spec and handed out, the motor is spec and handed out, the gear ratio is fixed and not adjustable. What wins in Can-Am classes is not selected special motors, special tires or crazy timing…. what wins in this class is simple; chassis setup and performance.

Dayger’s winning machine had 2 changes from stock; .the 3276 cross brace and CRC’s Z-flex super stiff chassis. Much like his teammate Andrew Knapp, Jeff prefers the feel and performance of carbon fiber over any metal chassis material. Jeff also like the fact that his pits are not littered with potato chip aluminum chassis that become warped and bent with a small impact. When a 1/12th car hits a wall, all chassis, carbon, stiff carbon, aluminum or titanium, are put under high stress and flex greatly during the impact. Unlike metal chassis that flex and stay tweaked forever, CRC’s Z-flex super stiff material returns to dead flat every time.

The World GT-R class turned out to be another Brian Wynn benefit race. The CRC race team manager has been in a small slump lately. However, at the 2019 Snowbird Nationals, Brian had his Trinity powered CRC Gen-X 10RT tuned up and running strong. Wynn took all four rounds and the A-main victory. In some of the later rounds, Speedmerchant pilot, Steve Boice gave Brian fits, leading qualifiers for a good portion only to have Wynn steal the qualifier late in the race. Going into the A-main, it seemed that victory could go either way as the top 2 had separated themselves in qualifying from 3rd place qualifier, Roche pilot Wayne Gerber.

When the horn went off, Brian had his rubber tire rocket rippin’. Wynn was able to build a small gap and take the victory with Boice right there in second. Again, like most all the Factory Team CRC cars, Brian’s GenX-10 RT was very stock and affordable. No fancy carbon, no bendable aluminum or titanium chassis, no unobtanium anything. The only “non-stock” items on the car was the solid axle (no diff) and the white center spring.

While CRC “started” this class with the advent of the CRC RT1 rubber tire and wheels, it is great to see other manufactures joining the class. Manufactures like Speedmerchant, Roche, XRay, Capricorn, Associated and even a old CEFX car are making a visit to the A-main. World GT-R is affordable, realistic and a lot of fun. With 2 or 3 seasons on a set of tires, high grip and realistic handling and scale looks; the class is a winner for local tracks and big events.

Last year at the Birds, CRC went 1-2 in Formula 1 with the CRC WTF-1 car in the hands of Team CRC Japan Ace Hayato Ishioka and Andrew Knapp. Now, returning as defending champ, CRC had four (4) WTF-1 cars in the A-main with Dayger, Knapp, Wynn and Ficco at the wheel.

Dayger and Knapp would qualify 2-3 behind the TQ man, XRay driver Jan Ratheisky. Jan is an incredible driver that seems to find a way to be at a major event around the world every weekend. Just following Jan on Facebook, someone could earn frequent flyer miles; Asia, Europe, South Africa and North America, Jan puts in the work and time and his results show it. He is a tough cookie on the track, especially in F1. On the opposite side are the 2 that qualified behind him; Trinity/CRC drivers Jeff Dayger and Andrew Knapp. Both RARELY get to practice or test, and the little that Knapp runs is usually jumping his offroad car on some silly clay track with slick offroad tires. Knapp and Dayger have not seen a carpet track since late November in Cleveland. So to qualify very close to the well polished machine that is Mr. Ratheisky is quite a testament of the 2 drivers, their cars and power package.

Jeff especially had his Trinity powered CRC ride going very fast, climbing closer and closer to TQ as the qualifying rounds went on. As the event progressed, you could see Jeff “remembering and retraining” himself on how to drive and tune an F1 car, each round, getting faster and faster. In the end, he would miss Jan’s T.Q. by a scant .029 seconds.

In the A-main, a little bouncing and banging would ensue and Jeff would be shuffled all the way back to 6th position. When he recovered, Dayger would lay down 5 consecutive laps that were faster than ANY OTHER DRIVER’s single fastest lap. Dayger had a rocketship on his hands, by FAR the fastest car on the track. Five laps in succession faster than any other driver best lap. That says a lot about the driver, the car and the power package. Would he go on to win? No, a 3rd place this time for the fastest F1 on the track. So while it is disappointing to have the quickest car and not win, it is impressive for the CRC WTF-1 to be that fast and to put 4 cars in the A-main in the tough Formula 1 division.

With the exception of the machined upper A-arms, Dayger’s CRC WTF-1 was BOX STOCK. Stock carbon fiber components, stock front springs, stock servo position, stock battery position, stock center spring and side springs. Built like the manual suggests. It is all in the kit, and with the CRC kit being $100 less than the competition, just win more, don’t spend more!

Snowbirds Oval – The year of the rubber tire!

The year of the rubber tire, Snowbirds 2019. The RTT class was the SINGLE LARGEST CLASS for the weekend, road or oval. Rubber tire racing for pan cars is gaining traction (pun intended). More and more racers are enjoying spending more time actually racing their car instead of truing tires and measuring tire wear. Racers are spending less on tires and enjoying more time on the race track. All made possible by the CRC RT-1 rubber tire for 1/10th pan cars.

The Birds is a unique race. It features both road course and oval, with multiple track changes during the race week. It has early mornings and late nights. The Birds has qualifying days with 2 qualifiers, and others with only one qualifier per day. The Birds just has a few nuances that are unique to this wonderful event, held mid-winter in the land of sun and warmth (not so warm this year).

The track surface as always, CRC’s super tough, ultra high grip Fasttrak II racing carpet. It lays out flat, builds grip fast, has practically no fuzz with a wide generous racing groove, even offline. Also featured at the event is CRC quick and easy rugged barrier system, Clik Trak. The most important asset of the Birds, 800 entries and a great management team that balances a good time with a fair event. Looking forward to 2020!