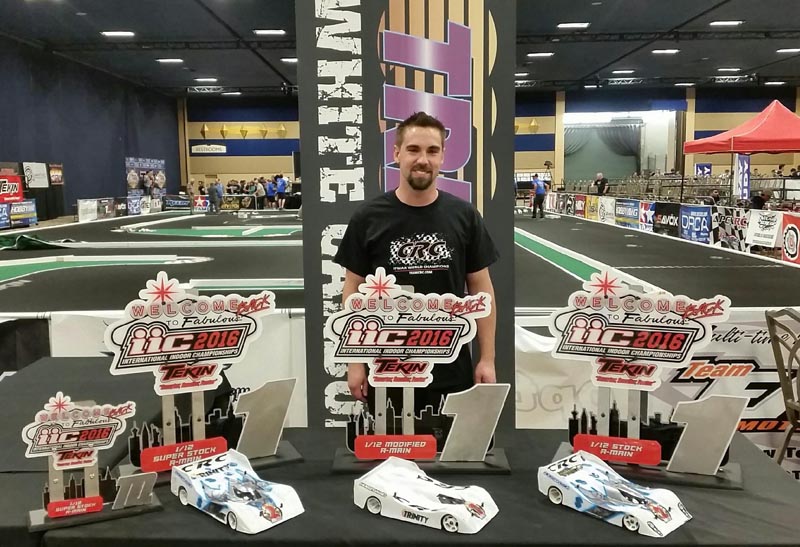 at the IIC in Las Vegas!

In an exciting 1/12th modified A final, Knapp took the win from his #2 starting spot, catching the leader an making a great pass coming onto the straight. His car… a very stock CRC Xti-WC, same car you can buy at your favorite hobby store for just $199.99. Did he run a lot of expensive options, aluminum chassis? fancy option parts? expensive “un-obtainium” team parts? Special tires? NO! The only options Andrew used was the $14.99 Extended Rear top plate, #3263. No $100 aluminum chassis, no team chassis or bottom plates, just a stock shock, no special tires. Andrew used standard CRC Blu front and Blu rear tires.

In 17.5, qualifying was a Wiita/Knapp show. Minnesota driver John Wiita, put his CRC Xti-WC on the pole in the final round. Knapp and Wiita went back and forth for T.Q. in all four rounds, Knapp holding round 1 + 3, Wiita taking 2 and 4 and the overall T.Q. In the A-main, the 2 battled, squeezing the corners and curbing as close as they could in an effort to gain speed. Andrew was able to sneak by to take the win. CRC cars represented 50% of the A-main field.

In 13.5, Andrew flat “drove away” from his competitors, building a good sized lead when the 8 minute race ended. He was T.Q and led every lap dominating the A-main and winning every round of qualifying, undefeated every time his car hit the track in 13.5. In 13.5, Andrew drove the CRC 2017 prototype. This car is heavily based on the Xti-WC geometry and layout, with just a few tweaks. Again, no aluminum chassis, no aluminum rear plate, just CRC’s standard carbon fiber for all the chassis components. This car has CRC’s standard Pro-strut front end, Encore shock, stock tubes, diff and links. The 2017 prototype features a super-light and low slider motor pod, floating servo mount and new double clamping rear hub. This is the same car that sat on the podium at the 2016 Worlds in China and is based off the 2014 World Champion, CRC Xti-WC. As testing continues, these parts will be made available and current WC cars can be upgraded affordably.

After it’s introduction into the racing scene in last fall, World GT-R keeps growing and gaining popularity, both at local tracks and big race events. Why? Easy to drive 1/10th pan cars with more realistic bodies and scale sized tires that last and perform race after race. It is an easy class to get into and an affordable class to stay into.

Following wins in Cleveland, the Snowbirds and the Mile High event in April, the new Gen-X 10-RT keeps on winning. At the 2016 IIC, Brian Wynn took his Gen-X 10RT to a solid T.Q. and win. Mario Ficco joined Brian on the podium with his Gen-X 10RT. Both cars powered by CRC’s Rocket Fuel 1s pack, #3705. Of course, all the drivers used the RT-1 rubber tire and GTR rim with consistant, dependable performance.

Some people have commented that we offer an aluminum chassis and why didn’t Andrew use it? Also, some have commented that we have been pushing the carbon despite offering an aluminum chassis. The reaon is simple…. carbon is better and unlike aluminum, it returns to flat after a big impact. We watch racers continually replacing aluminum chassis after relatively small crashes, each replacement another hundred dollar bill! In addition, you do not need an expensive aluminum chassis to get great results. You do not need to spend (waste) money on aftermarket products to achieve top finishes. We need to keep the hobby affordable so we have 100 racers spending $10 instead of costs driving turnouts down and we get 10 racers spending a $100.

We are very proud of the aluminum chassis we offer with the help of our great support from Team CRC Japan, our chassis is stiffer and stronger than most of the competitiors we have tested. In some conditions it may benefit some drivers. However, a flat piece of aluminum subjected to a strong force will cause a flex and if the force is too high, aluminum may not return to 100% flat. It doesn’t take much to tweak a 1/12th car. For this reason, carbon is always a safer choice.