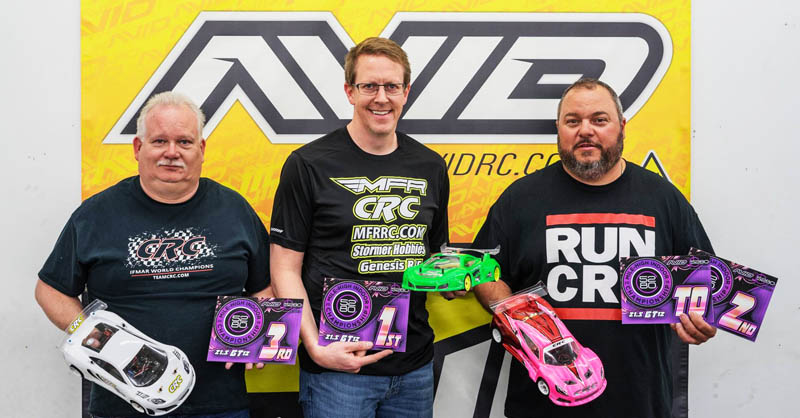 CRC wins in Colorado and Canada!

Wow… 618 entries…. what an event, what a facility. The 2019 Canadian Nationals was the largest road race in the world. Just a fantastic event with racers of all abilities in attendance to enjoy a weekend of great racing. The competition was top notch with top team drivers coming in from all over the globe.

The track – a monsterous 120′ x 60′ and the surface? Of course, only the best, CRC Fasttrak II Black carpet. Great grip with a nice wide racing groove.

The 13.5 class is a blend of seasoned 1/12th scale racers mixed in with 17.5 “spec” specialists. The class puts a premium on chassis efficiency and ease of driving, horsepower and driver skill. Team CRC/Trinity driver Andrew Knapp has dominated 13.5 all season long. The Canadian Nats was no different with a dominant T.Q. and win in the 1/12th Super Stock class. Andrew used the CRC CK25 car, tires and lightweight body! T.Q. and win…. 5 CRC cars in the A-main!

At this event, World GT-R was THE class with the largest growth from last year. The class entries were “rounded” out at 40 (4 heats of 10) and as always, the class delivered big. Scale looks, super affordable long lasting rubber tires, great handling and close competition, just an AWESOME class for on-road.

None of the headaches of 4wd touring cars, no belts, dog bones, 4 oil filled shocks; the class is just easy, affordable fun. For next season, give World GT-R a try at your club track or at your hobby store track.. anywhere you race on-road. If you have a massive large track, you can make it 13.5… but honestly, at the Canadian Nats with it’s massive 110 x 60 size, the speed felt great with blinky, 17.5 open motors. In fact, at the 2019 Canadian Nationals, with 1s batteries and a 17.5 motor, World GT-R was faster than VTA touring cars.

Results? The CRC team did fantastic as usual. With World GT-R getting a big push from CRC and our track in Rome, NY, it’s no surprise to see the top 3 an all CRC podium. However, it is great to see other manufacturers getting involved and getting faster and faster each race. Fast cars from Speedmerchant, XRay, Roche and Associated were all battling for the A-main. It is a great class of onroad.

World GT-R Podium – Brian Wynn takes the T.Q. and back to back championships. Mark Calandra gave Brian a tough run in the A-main with the 2 bumping and grinding at the beginning of the event. Some old man that spends too much time mowing the lawn instead of practicing (Frank Calandra), hung around in 3rd for much of the race waiting for the 2 ahead to crash. That big crash never happened and Brian went on to win, but Frank was able to steal 2nd from brother Mark later in the run for an all Rome, NY CRC podium.

Always held around “Tax Day” April 15th in the USA, the MHIC is a great event held in the Denver area. As one of the last big events of the season, the MHIC is known to introduce or promote something a little different. For example, the MHIC was the first big event to mandate spec tires for 1/12th scale. A great track, CRC Fasttrak II carpet and tough competition met the racers again in 2019.

This new class is picking up in popularity after making its National debut at the 2019 Snowbirds. The results? No different than the Snowbirds. A CRC lockout on the podium, 1-2-3 for the CK25 race car kit. And again rising to the top in the A-main was MFR/CRC driver Charlie Menard. He took his CRC CK25 to another GT12 Championship making him the undisputed King of GT12 for the 2018/19 season. Denver’s Mario Ficco would take a second place from his T.Q. starting position. Colorado pilot Jim McGee would round out the all CRC podium!

A solid turnout for the easiest, most “racer” friendly class in road racing; World GT-R. Mario Ficco took his CRC GenX-10 RT to a solid T.Q. and win in the A-main of World GT-R.

CRC takes 2 at the 2019 ROAR Nationals
Another IIC in Vegas, more CRC Domination!