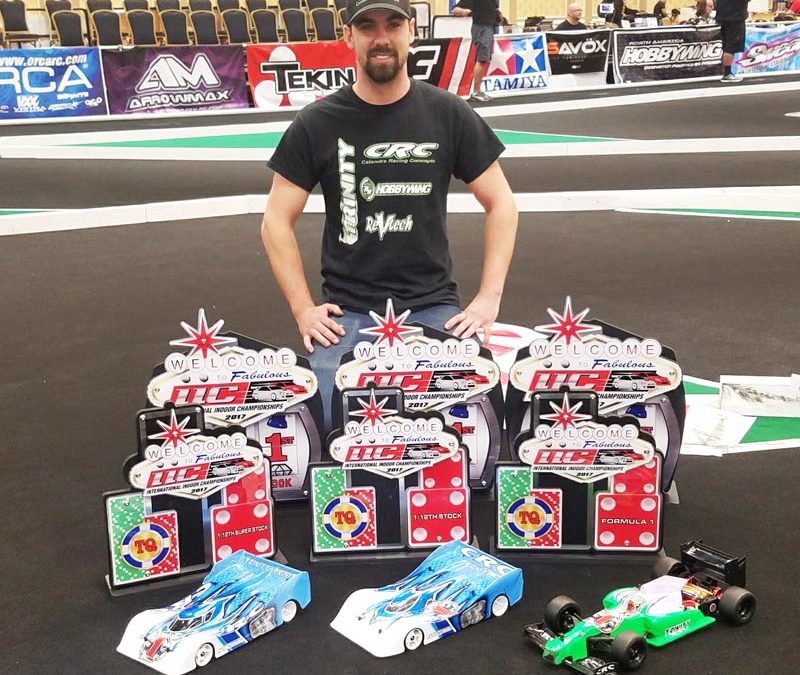 Knapp Double-downs in Vegas – back to back 3-peats

at the IIC in Las Vegas!

In 17.5, like the 2016 IIC last year, all competitors were handed out CRC Purple stripe 1/12th spec tires. Defending champ Andrew Knapp flew in Saturday after receiving his new CK25 the week previous. With no local track to test on, Knapp built his car and took off to Vegas with a car with ZERO laps on it. A couple of practice runs to shake down the new ride and he was ready to drop the gloves and battle for the win. Knapp would go on to totally dominate the class with his new Trinity powered CK25. Joining Andrew in the A-main; Team CRC drivers Brian Wynn, Kevin Van Ert and last year’s T.Q. and runner up, John Wiita. All 4 chose the CRC/Black Art line of 1/12th bodies, either the World Champion R8C or the Lola. Wynn, Van Ert and Wiita chose the new CRC stock pack, the newly re-released 3702 battery pack.. The 6300 mah pack is BAD FAST with low internal resistance and high average voltage.

The 1/12th 13.5 class typically draws some top level modified drivers as well as racers from the 17.5 stock class. The class is deep with talent. Again this year, the CRC car, tires and Black Art body rose to the top in the hands of Andrew Knapp. Joining Andrew in the A-main was Wisconsin pilot, Kevin Van Ert. Van Ert has been red hot lately, tearing up tracks in the upper mid-west and all the large events he attends.

Formula 1 – Knapp leads every lap, T.Q. all 4 rounds and wins the main by over 8.5 seconds

The Formula 1 class continues to grow in North America, especially at large events. With more manufactures jumping into the fight, the class is getting very competitive. Much like the first year that the IIC featured F1, CRC again put the WTF-1 on top of the class. This year, Andrew Knapp annihilated the field leading every lap in qualifying, winning every round and leading every lap in the A-main, winning by over 8 seconds.

Andrew’s Trinity powered CRC WTF-1 FC16 was smooth and fast, with Knapp being able to drive in hard and power off the turns with ease. Andrew’s F1 was fairly stock, no fancy carbon nor aluminum chassis. The car had a Fenix gear diff and CRC’s soon to be released machined upper A-arms. Brian Wynn took his stock WTF-1 to an A-main position as well.

CRC Fasttrak II doubles down on Vegas, the best onroad carpet and the best for offroad carpet surface.

Since day one in 2005, the International Indoor Champs in Las Vegas has used CRC race carpet. The carpet is specifically designed for model car racing. Strong, high grip, with no weave or directional nap to cause cars to pull one way or the other, CRC carpet is the “de facto standard” in carpet race surfaces with a deep history of long life performance. Calandra Racing Concepts founder, Frank Calandra Jr., has been involved in the design and manufacture of model car racing since 1989, even before CRC was started, almost 30 years.

For the 2017 version of the Las Vegas race, promoter Scotty Ernst decided to bring carpet offroad to the event. This is a popular and growing segment of the hobby. He wanted strong carpet that could handle the rigors of modified cars with pin spikes. He wanted high grip, no fuzz and low tire wear. He needed a surface that would work for onroad AND offroad and last with great durability. He wanted a surface that did not have a weave or pattern that would cause the cars to drift around. And he wanted the confidence that both the IIC and the IOCC were run on a quality product, backed with years of experience and a with a company involved in model car racing. The choice was easy, CRC Fasttrak II. Congrats to the crew in Vegas, an excellent event for both the road and offroad portions!