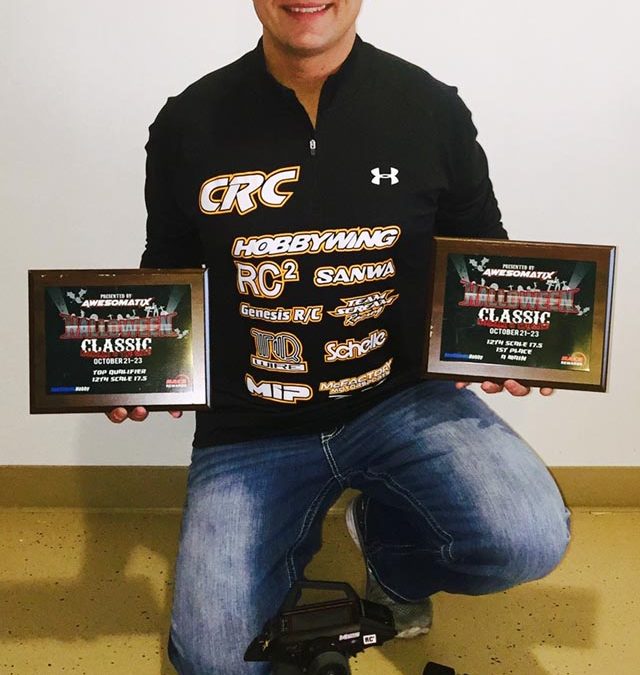 Team CRC scares away the competition at the Halloween Classic

Team CRC scares away the competition

at the 2016 Halloween Classic in Ohio!

In 17.5, qualifying was a Wiita show. Minnesota driver John Wiita, put his CRC Xti-WC on the pole for the A-main. Wisconsin pilot Kevin Van Ert took his CRC Xti-WC to a solid 3rd place with Ohio driver and former U.S. Indoor Champion Dana Bailes in 4th. With Charlie Menard and Brian Wynn in the A main, CRC cars represented 50% field, domination just like Vegas!

Just like the IIC in Vegas earlier in the month, Wiita found himself battling for the win with another CRC teammate, this time, New York driver Jeff Dayger. Both drivers would lead at one point during the race with Dayger taking a close-fought victory. In addition to their Xt-WC cars, both drivers used CRC tires and CRC/Black Art Lola bodies. The 13.5 A-main again proved to be full of CRC cars with 6 out of the 10 finalists running the brand.

After its introduction into the racing scene in last fall, World GT-R keeps growing and gaining popularity, both at local tracks and big race events. Why? Easy to drive 1/10th pan cars with more realistic bodies and scale sized tires that last and perform race after race. It is an easy class to get into and an affordable class to stay into. The CRC Gen-X 10RT is basically undefeated, winning every large race for World GT-R. At the 2016 Halloween Classic, the Rome, NY-based duo of Brian Wynn and Tom Firsching continued their club-race rivalry with a solid 1-2 finish in the GT-R A-main.

Earlier in the month, Brian Wynn set the fast lap in the A-main in Las Vegas, reeling in the leaders as time expired. He simply could not find a clean way past the top 2 cars. At the 2016 Halloween Classic, Wynn took his very stock CRC WTF-1 FC16 to a convincing T.Q and win. Ohio driver Zach Schuttenberg took his CRC F1 to a solid 3rd place. Both drivers were running on CRC RT-1 pre-mounted F1 racing tires.