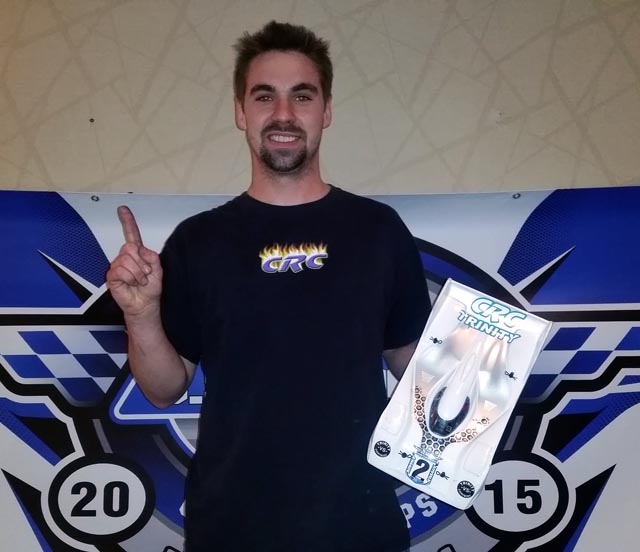 The grand daddy of all indoor races in North America is the U.S. Indoor Championships (USIC) in Cleveland, OH. This was the 36th running of this prestigious event. Over the recent years, the turnout has been up and down, well off the hay days in the late 80’s and early 90’s. This year, a great turnout with over 330 entries descending upon the Strongsville, Ohio Holiday Inn. As usual, the race room was the hotel ballroom now fitted with new CRC Fasttrak II (FT2) carpet. In the past, some of the issues of the event centered around a bumpy subfloor and rough track. This year, the floor/track building team knocked it out of the park with a smooth sub-floor and perfect installation of the new high traction FT2.

This year, the USIC accepted the new and hot class of World GT-R with open arms. These are World GT 1/10th pan cars with CRC’s new RT-1 rubber tires and GTR rims. The class uses a 17.5 motor, 1s battery and a new long list of bodies featuring great scale looks. The RT-1 tire with its scale appropriate size makes the class look great on the track. In the FIRST year, the World GT-R class was the 3rd largest class in terms of field size, pretty impressive for the first ever race.

The cars handled very well on the rubber tires. The RT-1 tires had no wear and no degredation, running as fast on the 20th run as the 2nd run. No ride height changes, no gearing changes for changing tire sizes and no tire truer!

Tom Firsching proved to be the man to beat with his CRC Gen SE. Tom was the T.Q. and drove away in the A-main. Speedmerchant ace pilot, Steve Boice, ran tough all weekend in 2nd with CRC’s Brian Wynn grabbing a 3rd place finishing position.

Without a doubt, the most dedicated, hardworking, focused and handsome driver CRC has on the team is back-to-back Youth division winner, Max Buca. This young man is a dedicated student and hard working racer, he even does his homework between rounds! Max defended his title with his CRC 1/12th car complete with CRC Spec purple stripe tires. Another big T.Q. and win in the awesome youth division at the U.S. Indoor Championships! He doesn’t talk much, he doesn’t smile much, been when it comes to getting it DONE (whether it is homework or the A-main), Max is all business! Great job kid!

A few weeks before the USIC, Andrew “youngmoney” Knapp tied the knot with his lovely wife Lauren. (She’s very nice, a wonderful girl…. but her taste in men??? well not so much, but that’s another story for a different webpage…) Rumor had it before the race was that Andrew was rusty and out of practice, spending more time on his honeymoon than practicing for the Indoor Champs. Based on his sizzling performance at the U.S. Indoor Champs, Andrew must have had a honeymoon at a carpet RC race track because he was on the money, or “#youngmoney” in his case. Although Knapp did not T.Q., he was dominant in taking 3 of 4 rounds, only to loose the pole position when he failed to finish round #4. He was the only driver to post a sub 8 second lap time.

In the A-main, Knapp had a classic dogfight with Associated driver Keven Hebert. It was a a real treat and a pleasure to watch both drivers wrestle these little rockets around the track within inches of each other. After a couple lead changes and a couple minor board meetings, Andrew fought his way to the front to win the A-main in the featured class at the U.S. indoor Champs.

Just minutes after winning the biggest race in his career, Andrew was found on the floor rolling up the carpet in a big teardown effort. In addition to picking up the track and sub-floor, Andrew was the main man during the carpet install before the race.

What a great turn-around for the U.S. Indoor Champs. Finally, a smooth, flat racetrack! Congrats to the sub-floor team, Steve + Dawn Schuttenberg, Michael Elwood and Geoff Ferron, you made a BIG difference. A nice flowing layout put on top of the new standard for R/C racing Carpet, CRC Fasttrak II. With almost 330 entries, there were some hiccups, but in general, a well run race. Can’t wait to do it again!