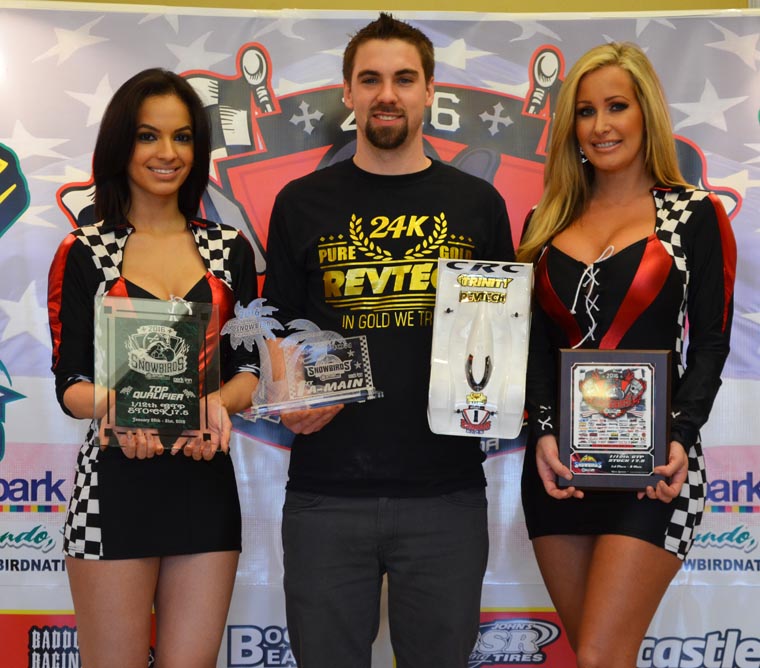 Team CRC winning around the world!

Markus Mobers wins the Reedy race in the UK!

Fresh off his impressive 1/12th Modified win at the 2015 U.S. Indoor Championships in Cleveland, Michigan’s Andrew Knapp rolled into the 2016 Snowbirds with more championships in mind. At this year’s event, both the 17.5 and 13.5 classes were stacked with talent with past and present stock and modified National champions on the entry list. Winning these classes was going to be very difficult with the stacked field. Andrew again proved the dominance of the Trinity powered CRC Xti-WC car from practice #1. Knapp was solid all week winning most of the qualifiers and leading the mains wire to wire. For tires, Andrew chose CRC’s spec Purple stripe tires. Despite this event being an “open” tire race, the fastest most comfortable tire to use was CRC’s purple stripe spec tire.

In the second race for CRC’s the new FC16 formula 1 car, Team CRC Japan pilots Kosuke Suzuki and Hayoto Ishioka ended up on the podium with a 2nd and 3rd place position. American CRC F1 Ace Mario Ficco finished in a solid 4th. The only thing stopping the CRC team from taking the win was a very determined and consistent, Jan Ratheisky. Suzuki pushed and pressured Jan for 5 straight minutes; looking low, sweeping wide, trying to find a way around Jan. To his credit, Ratheisky drove perfect, fending off many pass attempts by the young Japanese driver. Kosuke could have forced the issue, causing a collision, however, he waited and pressured taking his FC-16 car inside and out looking for a way by. Jan made no mistakes for the second straight year proving to be the man to beat in F1. The solid 2-3-4 position of the WTF1-FC16 combined with the 1-2 finish at the Cleveland race proved that the new CRC F1 car is bad fast, very affordable and ready to win more championships!

In a large shopping center in Milton Keynes, UK, the British Radio Car Association (BRCA) put on an incredible event for 1/12th scale racing. This was a very professional and public event with RC manufactures and retailers demonstrating and displaying their product for the hundreds of fans that assembled in the shopping area. The field of invitational drivers was star-studded, with 20 top drivers from around the world. The competition was very close and spectacular to the delight of the big crowd of spectators.

CRC’s newly signed Markus Mobers showed some tremendous pace and a great ability to pass and move forward in the heats. This is mandatory for a good result in the traditional Reedy-race format that features random heats and starting positions. After 10 single runs Markus won 7 out of those 10 heats and was equal on points with Toto Ebokura from Team Yokomo. Thanks to Mober’s best run being faster by 5 seconds, Markus took a deserving win for Team CRC and the World Champion Xti-WC car, placing 1st overall in front of the Yokomo of Ebokura and the XRay cars of early favorite Alexander Hagberg and Olly Jeffries.

Team CRC strong at the Snowbirds in 1/12th Modified!